You are here: Home / Murder, she wrote: Carin Gerhardsen

Carin Gerhardsen, author of a popular crime series set in Stockholm, talks of the Scandinavian noir and fairy tales in an interview with Mini Anthikad Chhibber from The Hindu.

Carin Gerhardsen’s highly addictive crime thrillers are an honourable addition to the burgeoning ranks of Scandinavian noir. The eight-book series follow Conny Sjöberg, a police detective in the Hammarby police station in Stockholm, and his team as they solve gruesome, gripping crimes. The investigating officers have their own mysteries to deal with including Petra’s horrific date rape, Sjöberg’s disquieting dreams and Einar Eriksson’s tragic past. The English translations of the first three books, The Gingerbread House, Cinderella Girl and The Last Lullaby have been published by Penguin. In this email interview, the 55-year-old mathematician-turned-author discusses crime fiction, nursery rhymes and the Stieg Larsson effect.

Is The Gingerbread House your first book?

The Gingerbread House is the first book in the Hammarby series, but I made my literary debut more than 25 years ago with the philosophical novel Påflyktfråntiden (Escape from time). I was 29 years old and rather naive. I thought that a good novel would sell by itself. My book got good reviews but without marketing, nothing much happened. I abandoned writing in favour of a career within IT consultancy.

Later my husband persuaded me to give writing another chance, which I did. Since I always loved reading crime novels and took a great interest in solving problems, I decided to give crime a try.

Why did you choose the police procedural?

It might be the best way of writing a crime novel without sacrificing credibility by creating superheroes. The police are still, and will always be, the most likely force to solve a crime — not psychologists, journalists, old ladies knitting or priests.

Could you comment on the popularity of Scandinavian crime fiction?

Sjöwall and Wahlöö wrote a series of fantastic crime novels back in the 70s that might have inspired us all. Their The Laughing Policeman is, in my opinion, the best crime novel ever written. Then there is the Stieg Larsson effect. The best of Scandinavian crime literature has elements of noir.

The world believes that Scandinavian countries are idyllic places with hardly any crime. That view obviously contrasts sharply with the underbelly of Scandinavian societies. I find the best crime writers’ way of being inside the heads of their characters very Scandinavian.

Do you read a lot of crime fiction? Who are your favourites?

When I started writing, I stopped reading crime novels. I don’t let myself be influenced by other authors. I am, however, influenced by the television series, the Danish ones for instance, with their deeply credible characters. Having said that, my favourites crime writers are Ruth Rendell, Sjöwall-Wahlöö and Karin Fossum.

Could you comment on the fairytale theme running through the novels?

The gingerbread house, as it is described in the novel, was in fact my preschool when I was six. So the title came easily to me. Then I got the idea of referring to fairy tales, lullabies and other childish things in subsequent titles as well. The idyllic shimmer of something made for children creates a thrilling contrast to the cover and the contents of a horrifying book.

In Cinderella Girl one of the characters blames the welfare state for the isolation. Comment.

There are two sisters growing up in misery surrounded by alcoholics, there is a young man who is held captive by his abusive father, there is a little girl waking up one morning to find that she has been abandoned by her family in a locked apartment.

So I’d say Cinderella Girl is about different aspects of isolation. The welfare state is by no means to blame for isolation, but I think it is easier to become isolated, as everybody is preoccupied with their lives and there is less socialising across generations.

By placing children and women in extreme peril are you addressing primeval fears?

I want to be captivated by the books I read and write. And what could possibly affect and frighten us more than a child in danger?

Why did you choose to have mysteries in the investigating officers’ lives?

I wanted to deepen the portrayal of the main characters, and after some thinking I realised that the best way of doing that is by adding another mystery.

Which character do you identify with the most? Why?

I love them all. I like to think that I created a bunch of flesh-and-blood human beings with flaws and good qualities, just like most of us. No superheroes, no complete idiots. But if I have to pick one I will pick Conny Sjöberg, because he is a lot like my husband. Or maybe Hedvig Gerdin (who’s introduced in the fourth novel) because she is a lot like me. No, I will definitely pick Jamal Hamad, because though his destiny is not desirable, he is still a very amiable person.

How has your mathematics background helped in your writing?

For a mathematician it is paradise to let words flow and flourish. For me as a writer it is a relief to work with a clearly-defined problem that has a single solution.

I work hard on the plot. It is important that it all comes together neatly. Probably my interest in problem-solving, mathematics and logic helps to figure that out.

At the moment I’m working on two projects: A thriller for youngsters called The Gemini Project. It is the first part of a series on medical experiments and serial killers. The other one is a thriller for adults, about the violent effects of a mystical accident.

You find the interview with Carin Gerhardsen here. 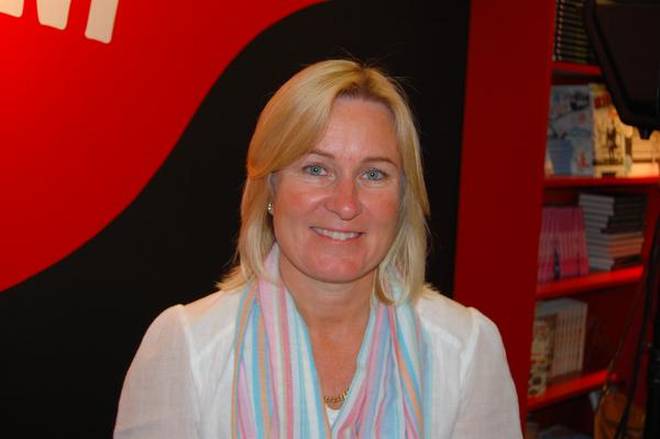