You are here: Home / C More and TV4 to do a new season of Morden i Sandhamn 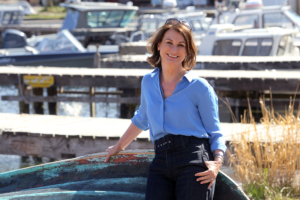 C More and TV4 have ordered a seventh season of the popular television series Morden i Sandhamn, based on the characters in the Viveca Sten crime novels. With the new feature length episodes, scheduled to premier next year, the books and the televisual adaption will go their separate ways.

Now, the production of four new episodes of Morden i Sandhamn enter their most crucial phase. The shoot started in May, but during this week it moved out to the iconic Sandhamn where the majority of the story takes place.

The four new movies are scheduled to premier on C More and TV4 in 2020. The beloved actress Alexandra Rapaport is back as Nora Linde.

– It will be a lot of fun to return to Sandhamn. Nora is a character very far away from me as a private person and it is exciting to get to further explore and develop her.  I can promise that the new season will have several surprises and twists that hopefully will shake and engage our already broad audience, but also attract new viewers, says Alexandra Rapaport.

Morden i Sandhamn is based on the characters of Viveca Sten´s crime novels. As the adaption enters its seventh season, the characters’ lives and stories have started a parallel life to Viveca Sten’s books and the original story. A mutual decision was therefore made to let the stories keep growing in separate ways.

– It has always been so exciting to see my beloved Sandhamn come to life on the TV-screen. All the viewers and book readers all over the world is an incredible source of energy and inspiration.  Now I, together with Filmlance, TV4 and C More, get the opportunity to give them new stories from the universe that means so much to me. It is the highest form of flattery that my books have not only been adapted for TV but that they also inspire new and original stories that can be seen all over the world, says Viveca Sten.

– Morden i Sandhamn is one of C Mores and TV4´s great successes that just keep engaging, entertain and touch both longtime viewers and new. The world that Viveca Sten created with her books  has been an invaluable stepping stone in the creation of the series universe and we have, together with Filmlance, had a very good collaboration. Now we enter the tenth year and it felt like a natural next step for us, Filmalance and Viveca to let the book and movies go in their own directions. It has created great possibilities and added a spark to continue with the books and the movie adaptions, says  Niva Westlin Dahl, executive producer on C More and TV4.

Morden i Sandhamn is being filmed during the summer of  2019 and is expected to premier on C More and TV4 during 2020. Filmlance International AB, which is a part of  Endemol Shine Nordics, are producing. It is directed by Mattias Ohlsson and Niklas Ohlson. Manuscript is written by Johan Widerberg, Sara Heldt and Gustaf Skördeman.

Morden i Sandhamn has captivated viewers for six seasons. The first one was aired during Christmas of 2010 and the latest season premiered spring of 2018. Viveca Sten’s crime novels are published in 40 countries and have sold over five million copies.

To read more about this you can click here and here!

‘Sanctuary’ premiers on CMore May 30th!

Anna Fredriksson was interviewed by Selma Stories
Scroll to top