You are here: Home / Amazing review of Camilla Sten’s ‘The Lost Village’

It’s only two weeks left before Camilla Sten’s latest novel will be published.
And this amazing review from BTJ is just making us even more excited for April 4th!

“This is a fantastic Swedish thriller with a suggestive/an evocative  milieu, dilapidated houses in a northern forest, and an appealing riddle that has to be investigated: why was an entire village abandoned 60 years ago? Habitual horror readers will quickly recognise a slew of motives from other books and movies. An entire village disappearing without a trace, a charismatic pastor with an adhering creepy cult, a possible deranged killer and a group of young filmmakers who are camping in an isolated spot. All transported to a nordic setting and skillfully plotted out in a new suspenseful tale. The story plays out in two timelines, one contemporary first person narrative who, with the help of some friends, is trying to make a documentary about the village that disappeared. And her great grandmother’s experiences in 1959 before she and the other villagers seem to be swallowed up by the earth. Time and again the reader is led in the wrong direction, just like the increasingly terrified main characters. Simply brilliantly written!” 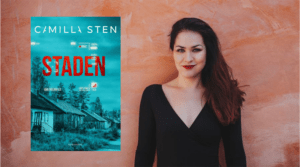