DON’T SHOW THEM YOU ARE STILL ALIVE.

SARA HAS decided to stay in Stockholm, even though she had an autumn filled with strange and traumatic experiences in the city. More aware than ever she gets a new job and apartment in hopes of keeping the faceless stalkers at bay.

BUT THE nightmarish blackmail soon picks up where it left off. Is there anyone at all in Sara’s surroundings she can trust?

IN THE RESISTENCE TRILOGY, Louise Boije af Gennäs tells the story about the individual’s fight with the authority. It’s a thrilling game between reality and fiction, where nothing seems to be what it’s supposed to – and where the truth can change it all.

This is crazy good, a real book to devour for adults. It’s completely impossible to stop reading when you have started.
Hyllan (book blog)

It’s a dark and dense psychological thriller that feels both modern and fresh. A true page-turner […]
Olivias bokhylla (blog) 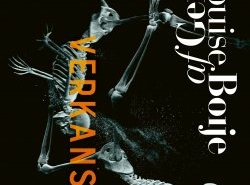 KAMPEN – THE STRUGGLE
Scroll to top