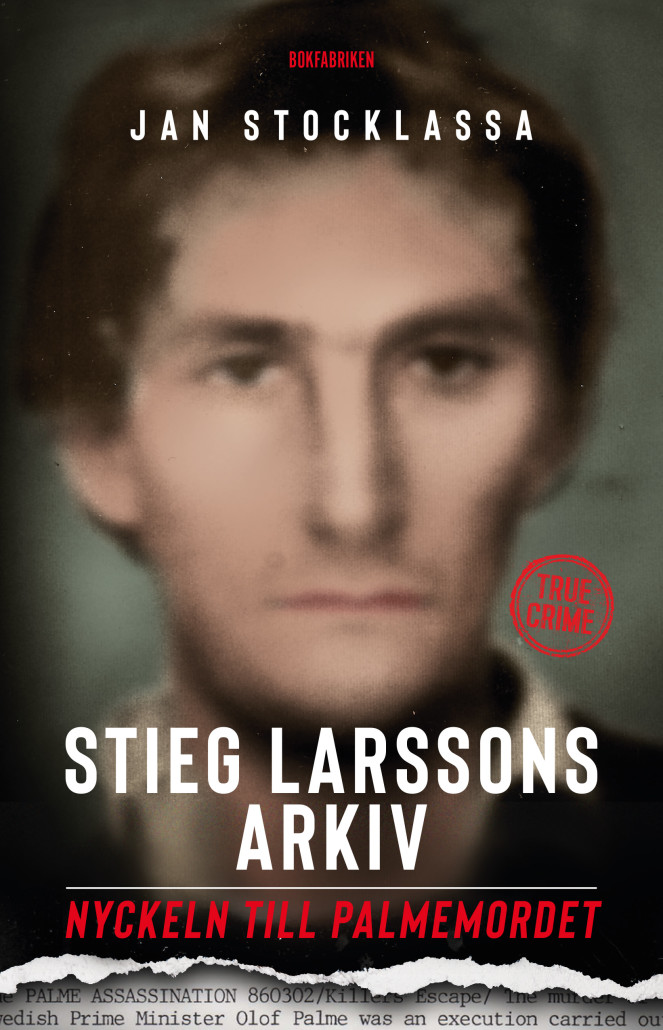 TEN YEARS AFTER Millennium author Stieg Larsson’s death, his private archive is opened for the first time. An archive that has been forgotten by everyone over the years, until journalist Jan Stocklassa requests access to it. In twenty cardboard boxes there are traces of his unknown project: a comprehensive research and investigation of the assassination of well-known Swedish Prime Minister Olof Palme.

In February 28th, 1986, Olof Palme – one of Europe’s most polarizing and renowned politicians, both domestically and internationally – was gunned down on the streets of Stockholm. The assassination remains unsolved until today.

THE PUZZLE PIECES in this archive show Stieg’s theory of how the murder of Olof Palme was organized. A theory consisting of people who could easily have been fictitious characters in one of his novels. In his novels we can also recognize the real characters from his research – and we learn that the imagination very often is close to the truth.

IN 2014, JOURNALIST and documentary filmmaker Jan Stocklassa managed to exclusively access Stieg Larsson’s extensive research. When he goes through Stieg’s documents, the forgotten theory is resurrected and, with Stieg’s own research as the foundation, Stocklassa follows in his footsteps. The question remains: What would Stieg have found if he had lived?
Jan Stocklassa decides to find out. Laying out the puzzle, we follow the trails of Stieg Larsson’s quest for answers in one of the most enigmatic murder mysteries in European history. When Stocklassa brings his theories to life, he unveils a story as dramatic as Stieg Larsson’s famous novels.

Having gained exclusive access to Larsson’s trove of research, Stocklassa presents an in-depth look into the investigation. Based on the findings, Swedish police now have a suspect for the first time in years. This well-crafted whodunit will keep readers engaged from start to finish … This story is sure to gain international traction as the investigation into the Palme assassination heats up again.
Library Journal

[Stocklassa] handles the legacy of Stieg Larsson, staying true to the author, and gives it a dramatic and action-packed dimension that holds all the way through the 480 pages […] he comes to the end with a story of a single shot that hit Sweden right in the plexus.
Politiken, Denmark

The inspiration from Stieg Larsson is clear, the book is written as a novel; Stocklassa […] succeeds in keeping the excitement up and the skepticism down – and […] tying all the threads together in this extremely complicated affair.
Weekendavisen, Denmark

Jan Stocklassa has written a deeply fascinating book about the different theories surrounding the assassination of Olof Palme.
Københavneravisen, Denmark

A documentary book that you read in the same way as the best thrillers, including cold sweat.
La Dépêche du Midi, France

Thanks to Jan Stocklassa’s fascinating narrative-palimpsest, [the Olof Palme case] is now progressing at the fast pace of Millennium.
Le Monde, France

[…] by virtue of a huge journalistic work , we are served a fascinating and engaging close study of a Prime Minister murder, and not at least the sociocultural climate it sprung from.
Aftenposten, Norway

A hybrid between essay, investigative journalism and espionage that moves through the path opened by
the author of Millennium and approaches the definitive solution.
Juan Carlos Galindo, El País

The author of Millennium hit the target in his investigation on the murder of Olof Palme, which now culminates Jan Stocklassa.
Miguel Lorenci, Diario Sur

Thanks to Stocklassa, it is now possible that everyone has an answer.
El Periódico

The book that the author of Millennium would have wanted to write and that solves the murder of a real case.
Telva

Impeccable development of the investigation that leaves the murder of Olof Palme about to be resolved.
El placer de la lectura

A book that includes the works of Larsson and Stocklassa, written as a crime novel. With conspiracies, characters and situations that seem to come from one of Larsson’s stories, but real.
Catalunya Ràdio

The work as an investigative journalist is not without danger. Names like Woodward and Stocklassa have obviously felt threatened during their careers, but it’s rarely the big fish that is hit. It draws to much attention.
Olav Skaaning Andersen, Jyllandsposten, Denmark.

This incredible book which is ”Stieg Larsson’s legacy” [..] It’s a grand book, an impossible book, written by four hands from beyond the grave.
Radio France by Nicolas Demorand

Its content will make a splash, open the case again and once again stir up Sweden’s trauma.
NDR (German radio)

Enjoy this documentary novel as if it was another work by Stieg Larsson.
El placer de La Lectura, Spain

Stocklassa’s description of the preparations of the assassination is phenomenal, also because you know that Stieg Larsson’s legacy is not a crime novel, it is true crime.
De Morgen daily, the Netherlands

The author enters a world who looks suspiciously like those from Larsson’s novels: a parallel universe full of messages in secret language, spies that make up mysterious ways to die, and with a Prague femme fatale as Lisbeth Salander, the lead character from the Millennium trilogy.
NRC daily, The Netherlands